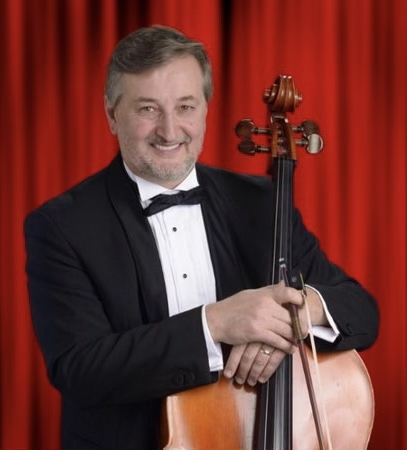 This is the launch of the Music for Youth Concert Lecture series featuring cellist Gjorgj Kroqi. The concert will explore the birth and growth of Russian Nationalism that spawned an impressive generation of composers, musicians, dancers and visual artists. The public is invited to come in person to this event. Registration is required.

Gjorgj Kroqi started playing cello at age of 6. He attended the music school Prenk Jakova in his native town of Shkoder, Albania. Mr. Kroqi earned his degree in cello performance and teaching in the Academy of Fine Arts in Tirana, Albania. From 1994-1998 studied at in Graz, Austria. During that time he was an active performer with various groups in the region, including the orchestra of the Cathedral of Graz. Mr. Kroqi has performed in many countries in Europe, Italy, Spain, Czech Republic, and Hungary Since arriving in Connecticut, Mr. Kroqi has performed with many orchestras including Waterbury Symphony, Bridgeport Symphony, Wallingford Symphony, New Britain Symphony and many other groups throughout Connecticut.

From 2001-2016 Mr. Kroqi was the Music Director, Chamber Orchestra Conductor and Cello Coach of the Greater Waterbury Youth Symphony. Currently Mr. Kroqi is the orchestra director at Roger Ludlowe Middle School in Fairfield. He is also the cello teacher at Taft High School in Watertown. Mr. Kroqi also teaches private cello in the Fairfield and Cheshire area.