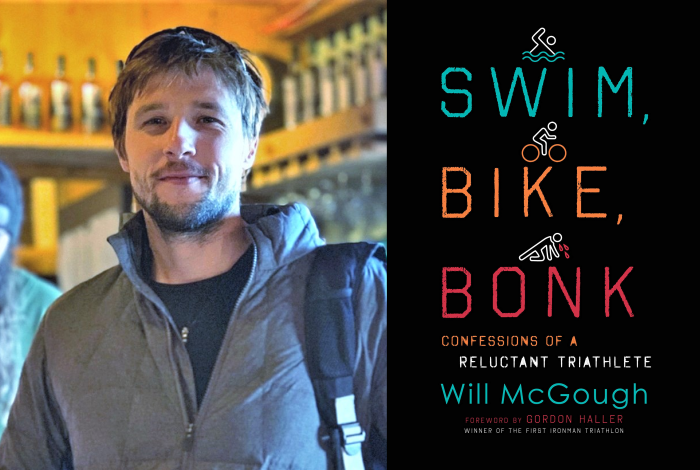 Join us for a Digital Meet the Author event on Zoom with Will McGough, interviewed by Mike McCreesh. McGough is the author of Swim, Bike, Bonk: Confessions of a Reluctant Triathlete, the story of his participation in, around, and over the course of one of the world’s premier triathlons, the annual 140.6-mile Ironman in Tempe, Arizona. McGough chronicles the Ironman’s history, his unorthodox training, the pageantry of the race weekend, and his attempt to finish the epic event.

“Every triathlete wants to write a book about his or her first Ironman, and many do. The results are rarely interesting to anyone other than the author. But here’s an exception. Will McGough is a travel writer, and what makes Swim, Bike, Bonk work is that he writes about triathlon as though it’s a weird foreign country he’s visiting. His humorous, skeptical outsider’s perspective allows insiders like me to see the sport with fresh eyes and appreciate it in a new way.”
— Matt Fitzgerald, acclaimed endurance sports coach, nutritionist, and author

“Swim, Bike, Bonk is a well-researched account of everything McGough learned during his abbreviated time as an Ironman in training… Doing an Ironman isn’t easy, and it’s often not pretty. McGough captures all of that spirit in style.”
— Triathlete Magazine Canada

“The book is absolutely hysterical…This is a great book for a newbie triathlete and an experienced Ironman would love it as well because it’s raw, truthful, insightful and humorous all in one package.”
— A Triathlete’s Diary

“[Swim Bike Bonk digs] into the psyche of those who are beyond passionate to the point of obsession with pursuit of the achievement that is the mother of all endurance events.”
— Outspoken Cyclist

About Will McGough (author)
Will McGough is an award-winning international travel writer and the owner of Wake and Wander Media. He graduated from Virginia Tech a long time ago and has written for a variety of adventure and travel publications. He also guides trips and splits his time between Hawaii, Colorado, and the road.

About Swim, Bike, Bonk
Just as George Plimpton had his proverbial cup of coffee in the NFL as the un-recruited and certainly unwanted fourth-string quarterback for the Detroit Lions, so, too, did Will McGough immerse himself in a sport he had no business trying. Like Plimpton, whose football folly turned into the bestselling Paper Lion, travel and outdoor writer McGough writes of his participation in, around, and over the course of one of the world’s premier triathlons, the annual 140.6-mile Ironman in Tempe, Arizona. McGough chronicles the Ironman’s history, his unorthodox training, the pageantry of the race weekend, and his attempt to finish the epic event. The narrative follows not just his race but also explores the cult and habits of the triathlete community, beginning with the first Ironman competition in Hawaii in 1978. This is a light-hearted, self-deprecating, and at times hilarious look at one man’s attempt to conquer the ultimate endurance sport, with a conclusion that will surprise and delight both dedicated triathletes as well as strangers to the sport.

About Mike McCreesh (interviewer)
Mike McCreesh, CFA is President of Battea Class Action Services. Prior to joining Battea, McCreesh was at Goldman, Sachs for 25 years. He recently fulfilled his term as Chairman of the Board of the St. Baldrick’s Foundation, the largest private pediatric cancer research grantor since 2016, which has raised over $250 million in research dollars. He also co-founded Team Brent, a group dedicated to fighting pediatric cancer, which has raised over $10 million for research.

McCreesh is an active fitness enthusiast. He has been a marathoner since college, was a college hockey player, and picked up biking solely to partake in the Pan-Mass Challenge and raise money to fight cancer. He did short tris with his daughters so decided to learn to really swim in 2015 and completed the 2016 Florida Ironman and 2018 Maryland Ironman.

McCreesh is an avid thriller reader but his favorite book of the last year was Swim, Bike, Bonk. McCreesh lives in Southport with his wife Dana, their three children, and five dogs.