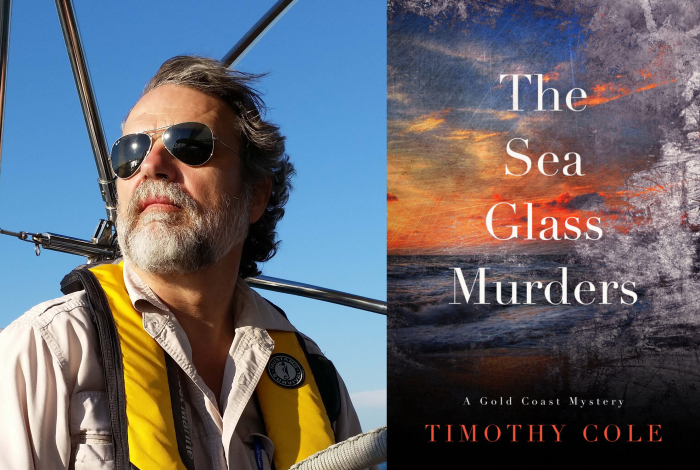 Join us for a Digital Meet the Author event on Zoom with Timothy Cole, author of The Sea Glass Murders, interviewed by friend of Pequot Library, Peg North.

A headless corpse tossed in a dumpster unites a small-town cop and a formidable retired lady spy to track a heartless killer.

“…an exquisitely written page-turner. Tim Cole is a bright new star in the firmament of mystery and thriller writers.”
~ Richard Armstrong, author, The Don Con

About Timothy Cole (author)
Cole is the chief content officer of Belvoir Media Group, publishers of monthly periodicals from major healthcare centers, including Harvard Medical School, The Cleveland Clinic, and Massachusetts General Hospital. In prior roles he served as an editor at leading marine magazines, and was the science/technology/aerospace editor of Popular Mechanics magazine. Tim’s editorial assignments have taken him aboard America’s nuclear Navy, to climate change studies at the South Pole, and to particle physics cyclotrons in Siberia. He is an instrument-rated private pilot, and holds a 50-ton captain’s license from the U.S. Coast Guard. Tim and his wife, Sarah Smedley, live in Greenwich, Connecticut and New York City. He just completed Cry for Lancer, which sends Dasha Petrov on a frantic hunt to stop the assassination of  President John F. Kennedy, and  find the president’s killers. Other books in the Dasha Petrov series include Moscow Five,  a spy ring on the verge of exposure by her KGB nemesis, and Relentless, a multi-continent race to stop ex-Nazis bent on creating the Fourth Reich.

About The Sea Glass Murders
A decapitated body burned to a crisp might be found in any dumpster in any city in America, but not in the aristocratic Gold Coast community of Westport, Connecticut. Local cop Tony DeFranco dutifully collects evidence, knowing that the State Police will take over the case. But when the state investigator tries to cover up the murder, DeFranco starts a rogue investigation.

He forms an alliance with retired CIA case officer Dasha Petrov, whose elderly, ladylike appearance masks a lifetime’s experience with violence and deception. As the body count mounts, DeFranco relies on Dasha’s insights and skills acquired over decades of global troubleshooting to stop a killer operating at the pinnacle of American power.

A glimpse at the sordid underside of position and wealth, The Sea Glass Murders is an action mystery with an immersive, fast-paced plot and unforgettable characters.

About Peg North
Peg North, a member of the Meet The Author Committee of Pequot Library, has been a Southport resident with her family for over 40 years and comes from a career in marketing. Interestingly, she and Tim Cole both worked for the same magazine years ago.

An adventurous traveler, Peg now focuses her time and energy on various Not For Profit organizations in the village of Southport.