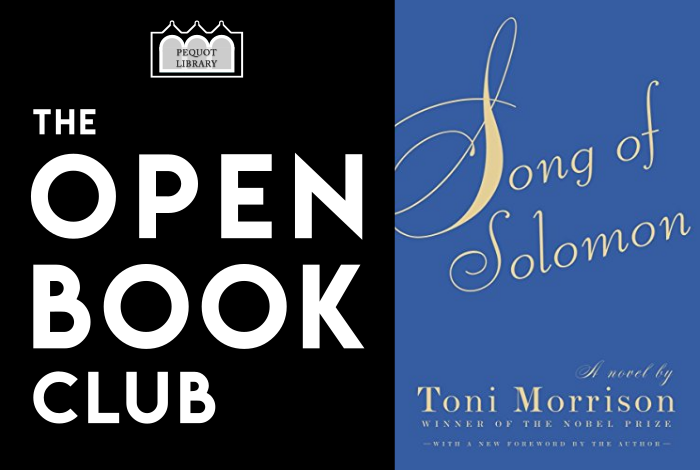 The Open Book Club is a monthly curated book club that focuses on BIPOC voices and inclusive American history through fiction and nonfiction narratives. The book selection for August is Song of Solomon by Toni Morrison.

Song of Solomon follows the life of Macon “Milkman” Dead III, an African-American man living in Michigan, from birth to adulthood. The novel won the National Book Critics Circle Award, was chosen for Oprah Winfrey’s popular book club, and was cited by the Swedish Academy in awarding Morrison the 1993 Nobel Prize in literature. In 1998, the Radcliffe Publishing Course named it the 25th best English-language novel of the 20th century.

Register below to join the Open Book Club discussion on Zoom on August 13 at 2:00 p.m., led by Pequot Library’s Chief Librarian Christine Catallo. Registered participants will receive an email on the day of the event with link/details on how to join the meeting. Limited to 100 participants.

The Open Book Club is part of Unpacking Pequot, an organization-wide effort to advance inclusive, anti-bias views in our community, while also “unpacking” the aspects of our history that have contributed to an unjust system. Through this work Pequot Library will seek to amplify BIPOC (black, indigenous, people of color) voices and experiences, educate ourselves and our community so that we can live in alignment and with respect to BIPOC values, diversify our institution in a way that is authentic and organic, and commit to always having a critical eye on where our gaps and blind-spots might be. We believe that actively seeking out these perspectives and voices, while embracing our cultural differences, will greatly enrich us as an institution and as a community.

About Song of Solomon, New York Times Bestseller
Milkman Dead was born shortly after a neighborhood eccentric hurled himself off a rooftop in a vain attempt at flight. For the rest of his life he, too, will be trying to fly. With this brilliantly imagined novel, Toni Morrison transfigures the coming-of-age story as audaciously as Saul Bellow or Gabriel García Márquez. As she follows Milkman from his rustbelt city to the place of his family’s origins, Morrison introduces an entire cast of strivers and seeresses, liars and assassins, the inhabitants of a fully realized black world.

About Toni Morrison
Chloe Anthony Wofford Morrison (born Chloe Ardelia Wofford; February 18, 1931 – August 5, 2019), known as Toni Morrison, was an American novelist, essayist, book editor, and college professor. Her first novel, The Bluest Eye, was published in 1970. The critically acclaimed Song of Solomon (1977) brought her national attention and won the National Book Critics Circle Award. In 1988, Morrison won the Pulitzer Prize for Beloved (1987); she gained worldwide recognition when she was awarded the Nobel Prize in Literature in 1993.

Born and raised in Lorain, Ohio, Morrison graduated from Howard University in 1953 with a B.A. in English. In 1955, she earned a master’s in American Literature from Cornell University. In 1957 she returned to Howard University, was married, and had two children before divorcing in 1964. In the late 1960s, she became the first black female editor in fiction at Random House in New York City. In the 1970s and 1980s, she developed her own reputation as an author, and her perhaps most celebrated work, Beloved, was made into a 1998 film.

In 1996, the National Endowment for the Humanities selected her for the Jefferson Lecture, the U.S. federal government’s highest honor for achievement in the humanities. Also that year, she was honored with the National Book Foundation’s Medal of Distinguished Contribution to American Letters. On May 29, 2012, President Barack Obama presented Morrison with the Presidential Medal of Freedom. In 2016, she received the PEN/Saul Bellow Award for Achievement in American Fiction.

Book Reviews and Further Reading
Kirkus
The New Yorker: Toni Morrison on Her Last Novel and the Voices of Her Characters
Oprah’s Book Club
The Washington Post