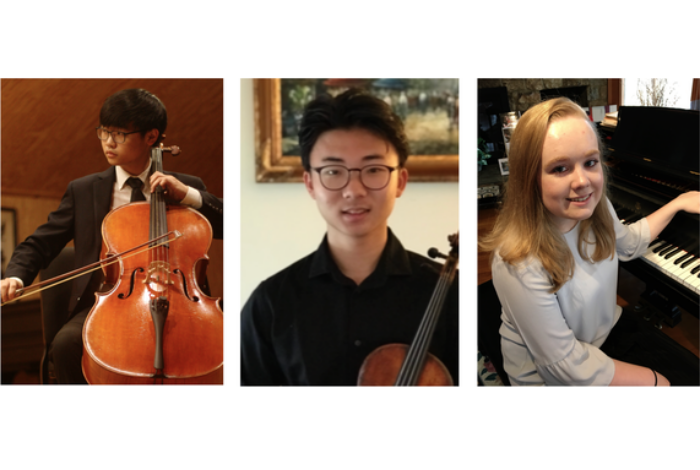 The top three finalists of the Marianne Liberatore Instrumental Competition are invited to perform in the Emerging Young Artist Series. The public is invited to attend these wonderful performances featuring talented musicians from Fairfield County.

RSVP suggested below. Free and open to the public. For more information email musicforyouthct@gmail.com.

First Place | ​Wujin Kim, cello
Wujin Kim, 18, studies cello under Clara Minhye Kim. He is a member of New York Youth Symphony and served as the principal cellist of Principal Orchestra of the Norwalk Youth Symphony in 2018 where he has been a member for 8 years. In 2017, Wujin was selected as a winner of Norwalk Youth Symphony Concerto Competition and was principal cellist of the CMEA All-State Orchestra in 2017 and 2019. He has performed with American Chamber Orchestra after winning the Concerto Competition in 2016.  In 2014 and 2015, Wujin was the winner of the Junior Competition and Senior Competition sponsored by Norwalk Symphony Orchestra. He won first prize in the New York Music Competition and second prize at the International Grande Music Competition. In the summer, Wujin has studied with Steven Doane at the Bowdoin International Music Festival and Hans Jørgen Jensen at the Meadowmount School of Music. He also has attended the Chamber Music Institute for Young Musicians for past 8 years and attended Elm City Chamberfest as the recipient of the Cello Scholarship in 2016.

Third Place | Avery Duer, piano
Avery Duer, 17, is a Junior at Greens Farms Academy in Westport, CT and has been studying piano with Ms. Yoshie Akimoto for almost three years. Most recently, Avery placed First in the Connecticut Bach Festival Youth Piano Division held in November 2018.  In April 2018, Avery placed First in the Senior Bach Category and Second in the Senior Chopin Category at the Schubert Club Competition of Fairfield County. She also placed Second in the Junior Division of the Chappaqua Orchestra Concerto Competition 2018.  Avery was a Finalist at the Greater Bridgeport Symphony Concerto Competitions in March 2018 and 2019. In February 2017, Avery won first prize and “Most Outstanding Performance” award at the 32nd Annual CSMTA Deborah Kahan Competition. She also won first prize for the French Award at the April 2017 Schubert Club Competition.  In the Fall 2016 Avery was Alternate Winner of the MTNA State Competition.

Every June, Avery takes great pride in participating in the Young Talent Chamber Music Workshop (YTCM), which is a highlight of the year.  She loves collaborating with other students and professionals like renowned cellist Allison Eldridge. In August 2017, she performed at the Vianden International Chamber Music Festival in Luxembourg. Avery’s passion is music.  When she is not on the piano, she enjoys playing all percussion instruments, especially for theater productions in the pit band for her school and the community. In addition to music, Avery is a committed Social Justice Advocate and is very involved in the equity and inclusion groups on campus that work to promote change in society.