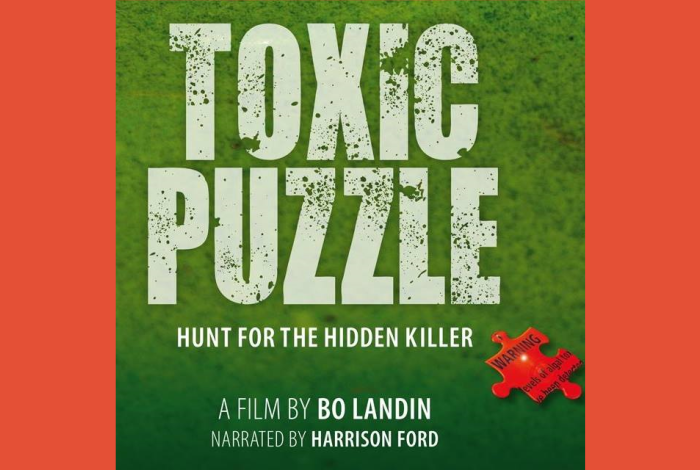 This program has been postponed.

TOXIC PUZZLE is a medical and environmental detective story where documentary filmmaker Bo Landin follows ethnobotanist Dr. Paul Alan Cox around the world in a hunt for a hidden killer — cyanobacteria in our waters fed by human pollution and climate change. Dr. Cox and his team discover a link between cyanobacteria and ALS (Lou Gehrig’s disease), Alzheimer’s, and Parkinson’s illnesses that may also provide clues to a cure.

Experience the film, followed by Q&A with Dr. Cox.

“The film quickly became a hunt for the hidden killer. When I started, we didn’t know where the story would lead us, and we didn’t have a clue for how long we would be on the road in our global quest.”  – Bo Landin, director

Dying from diseases like ALS and Alzheimer’s is a tormenting process. The illnesses are on the increase and scientists believe an environmental toxins can trigger the disease in a gene/environment interaction. TOXIC PUZZLE is a medical and environmental detective story where documentary filmmaker Bo Landin follows ethnobotanist Dr Paul Alan Cox and his scientific team around the world in a hunt for the hidden killer. The pieces come together in a toxic puzzle where cyanobacteria in our waters become the culprit. Are these organisms, fed by human pollution and climate change, staging nature’s revenge by claiming human lives?

In the film, which has been four year in the making, filmmaker Bo Landin was granted unique access to follow Paul Cox and over 50 collaborating scientists  from around the world. On their quest to learn more about toxic substances produced by cyanobacteria, they make an extraordinary discovery of a link between cyanobacteria and ALS (Lou Gehrig’s disease), Alzheimer’s and Parkinson’s illnesses. Is it possible that this link may also provide clues to a cure?

TOXIC PUZZLE – Hunt for the Hidden Killer is filmed in USA, Sweden, Baltic Sea, France, Qatar, Guam, Japan and Australia, and presents a problem applicable to many more countries worldwide.​

THE FACTS
“It seems to be a political issue; I don’t understand. People should not be exposed to cyanobacteria. Word needs to get out that these toxins are very dangerous.”  – Dr. Paul A. Cox

​We are on the brink of an ecological catastrophe. Due to pollution from agriculture and cities, and with climate change compounding the situation, cyanobacterial blooms are growing in frequency and duration more than ever. Toxic blooms now occur in lakes, rivers, dams and lagoons all over the world.

​Meanwhile, diseases like ALS, Alzheimer’s and Parkinson’s are on the increase in many countries, illnesses caused by the destruction of the brain and nervous system. Are some of the smallest organisms on Earth to blame?

Have cyanobacteria become the hidden killer?

​Cyanobacteria (also known as blue-green algae) are the most widespread group of living organisms on Earth. We find them on all continents, in fresh water and in oceans, in dry deserts and in frozen ground. Scientists now show that toxins produced by cyanobacteria cause damage to our brains and nervous systems. Can it explain why soldiers from recent desert wars have triple the expected incidence of ALS?

​And people around the world drink Spirulina juice and consume blue-green algae powder to boost health and wellbeing. Are people, unknowingly, consuming a potentially toxic substance that can destroy their brains?

​Science has opened up doors to a future which is both threatening and yet promising. Their work has created hope for ALS patients and their families. Maybe soon, the scientists will lay down the missing puzzle piece, which allows us to bring back our loved ones from the darkness of brain disorders, to regain lucidity and perfect health.

​Read more and get your facts and inspiration.

​THE SCIENCE
“It’s the structure of scientific revolutions. You have to take a risk. Paul’s a risk taker.”  – Dr. Deborah Mash, brain expert

In the feature documentary TOXIC PUZZLE, director Bo Landin goes on a hunt for the hidden killer with scientist Paul Alan Cox. In 1997, TIME magazine named Cox one of 11 “Heroes of Medicine” for his work in ethnobotanical drug discovery.

Cyanobacteria are photosynthetic bacteria of ancient date in the geological record. It is believed that cyanobacteria played a major role in generating the oxygen atmosphere of the earth. Once known as blue-green algae, cyanobacteria produce blooms – large floating masses- in warm, low water lakes and reservoirs- and in the world’s oceans. Some blooms in the oceans are thousands of kilometers long. The background image on this site (and to the right) is a NASA satellite image of the Baltic Sea with extensive blooms of cyanobacteria in summer months.

The scientists working with Paul Cox have now discovered that cyanobacteria produce the neurotoxin BMAA. Unfortunately it has now been shown BMAA is extremely toxic for humans, and we now know that this toxin cause neurodegenerative illness, and are associated with an increased risk of ALS, and possibly even Alzheimer’s and Parkinson’s.

The team’s research has led to the discovery that BMAA is produced by most cyanobacterial species and that the conditions under which they grow are critical for BMAA production. While cyanobacteria produce BMAA, the toxin can also biomagnify up the food chain and result in higher concentrations within filter-feeding or bottom-feeding invertebrates (like mussels and oysters) that live beneath cyanobacterial blooms.

Over 50 scientists worldwide are now putting together a  puzzle composed of many scientific discoveries. Among the astonishing findings is that some of the oldest people on earth in  the Ogimi village in Okinawa, Japan, appear to be protected from the brain illnesses afflicting people in other parts of the world. Dr. Cox found a natural substance in their food, an amino acid called L-serine, that appears to protect the brain from the toxin. Early tests show that L-serine is effective and blocks the progression of ALS. The scientists think this has opened a door to finding a new treatment, and possibly prevention, for Alzheimer’s.