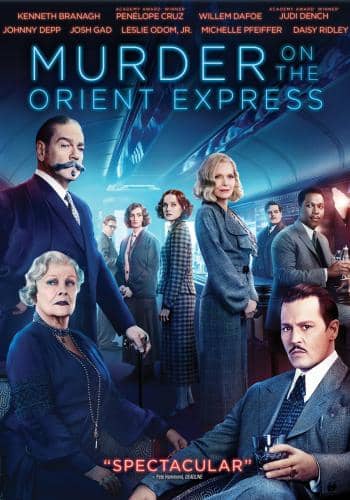 Bring your own refreshments and enjoy some of the best book-to-film adaptations from 2017 and 2018. Arrive at 3:00 p.m. to discuss the novel before enjoying the feature film at 3:30 p.m. Matinée screening. General seating. No reservation required. Free and open to the public.

August 8: Murder on the Orient Express (2017, PG-13, 1h 54m)
Original novel by Agatha Christie. A lavish trip through Europe quickly unfolds into a race against time to solve a murder aboard a train. When an avalanche stops the Orient Express dead in its tracks, the world’s greatest detective, Hercule Poirot, arrives to interrogate all passengers and search for clues before the killer can strike again.

August 15: Annihilation (2018, R, 2h)
Original novel by Jeff VanderMeer. A group of military scientists enter the “Shimmer,” a mysterious quarantined zone full of mutating landscapes and creatures on a research and rescue mission.

August 22: The Zookeeper’s Wife (2017, PG-13, 2h 7m)
Original novel by Diane Ackerman. When the Nazis invade Poland in 1939, Antonina Zabinski and her husband, Dr. Jan Zabinski, who run The Warsaw Zoo, covertly begin working with the Resistance to save the lives of hundreds from what has become the Warsaw Ghetto.