Join us for a discussion with Daniel Garodnick, former New York City Council member and author of Saving Stuyvesant Town: How One Community Defeated the Worst Real Estate Deal in History. 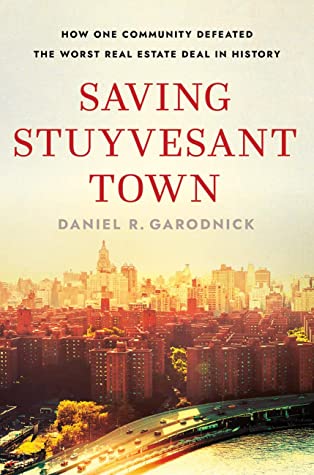 Dan Garodnick is the President and CEO of the Riverside Park Conservancy, a not-for profit organization advocating for a six mile park on Manhattan’s West Side.  As a 12-year Member of the New York City Council Dan Garodnick was known as one of New York’s most independent voices and effective legislators. The City Council unanimously passed his bill that will relieve more than 2,700 small businesses in Manhattan from paying the onerous commercial rent tax. He was also the lead negotiator in crafting a plan that will deliver nearly a billion dollars to improve subways and public spaces in Midtown over the next 20 years, through the East Midtown and Vanderbilt Corridor rezonings. Dan is a fierce tenant advocate and, in 2015, negotiated the largest affordable housing preservation deal in New York City’s history — 5,000 middle class housing units in Stuyvesant Town-Peter Cooper Village.  A lawyer with a background in civil rights, he has represented same sex couples seeking marriage equality, low wage workers seeking a living wage, and businesses seeking fair funding for city schools as part of the Campaign for Fiscal Equity.  Dan lives with his wife Zoe, and two young sons, in Manhattan.

He will be in conversation with Susan Moss.

Susan Moss graduated from Lafayette College with distinction and then went on to receive her MBA from the Zicklin School of Management at Baruch College. She worked for over 15 years in management consulting, including 10 years as a Senior Manager at KPMG/BearingPoint in New York City.  It was during this time that Susan and her husband Jeremy met and befriended Mr. Garodnick, living just blocks away from his residence at the time, Stuyvesant Town.  They have maintained a close friendship over the ensuing 25 years.

Susan has been a Fairfield resident for the last 19 years, living first in Southport and now Greenfield Hill with her husband, Jeremy, and their three children.