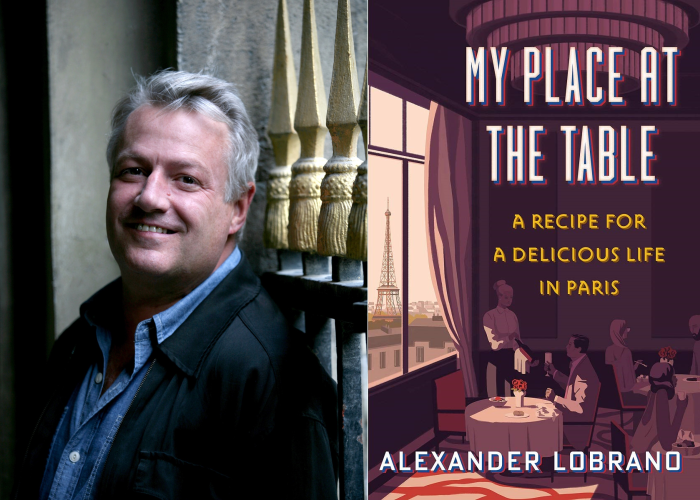 James Beard Award-winning writer Alexander Lobrano discusses his new memoir MY PLACE AT THE TABLE. Lobrano grew up in Connecticut and worked in magazines and book publishing in New York City before moving first to London, where he was a writer and editor, and then Paris, his home since 1986. He is the author of three books, HUNGRY FOR PARIS, HUNGRY FOR FRANCE and MY PLACE AT THE TABLE: A Recipe for a Delicious Life in Paris, which was published on June 1, 2021 by Houghton Mifflin Harcourt (now known as Mariner Books).

MY PLACE AT THE TABLE is a gastronomic coming of age story about how a shy boy from the suburbs of Connecticut becomes a famous food writer in Paris, respected even by the French themselves. New Yorker food writer Bill Buford calls it a “flat-out wonderful read, filled with secrets and stories.” Lobrano writes on food, travel, culture and style for publications in the U.S., U.K., Germany, Australia and other countries, including the New York Times, Wall Street Journal, Financial Times, Guardian, Saveur, Food & Wine, Bon Appetit and many others. He also blogs on restaurants in France and elsewhere on his website www.alexanderlobrano.com.

Alexander will be in conversation with Laura Downey ACS CCP Cheesemonger/Owner of Fairfield & Greenwich Cheese Company.

Laura and her business partner Chris Palumbo opened Fairfield Cheese Company in May of 2009 with a passion for cheese, a retail and catering background, and a desire to “fill a void” in our local food landscape. Their goal was to bring the best artisan cheese and specialty foods to the Fairfield community and the second part of that mission was to teach people about them. Cheese School has been an integral part of their shops because knowledge boosts confidence and appreciation.

In 2014 they expanded to serve the Greenwich, Connecticut community with Greenwich Cheese Company in the Cos Cob neighborhood of Greenwich.

In 2017, we launched Cheesemonger Box, an e-commerce only website that brings the cut-to-order cheese shop experience around the country. They are both American Cheese Society Certified Cheese Professionals (ACS CCP), a distinction earned by only a few hundred people nationwide. And in addition to winning several awards and seals of approval from culinary magazines and establishments, we’ve earned a listing in the Oxford Companion to Cheese.