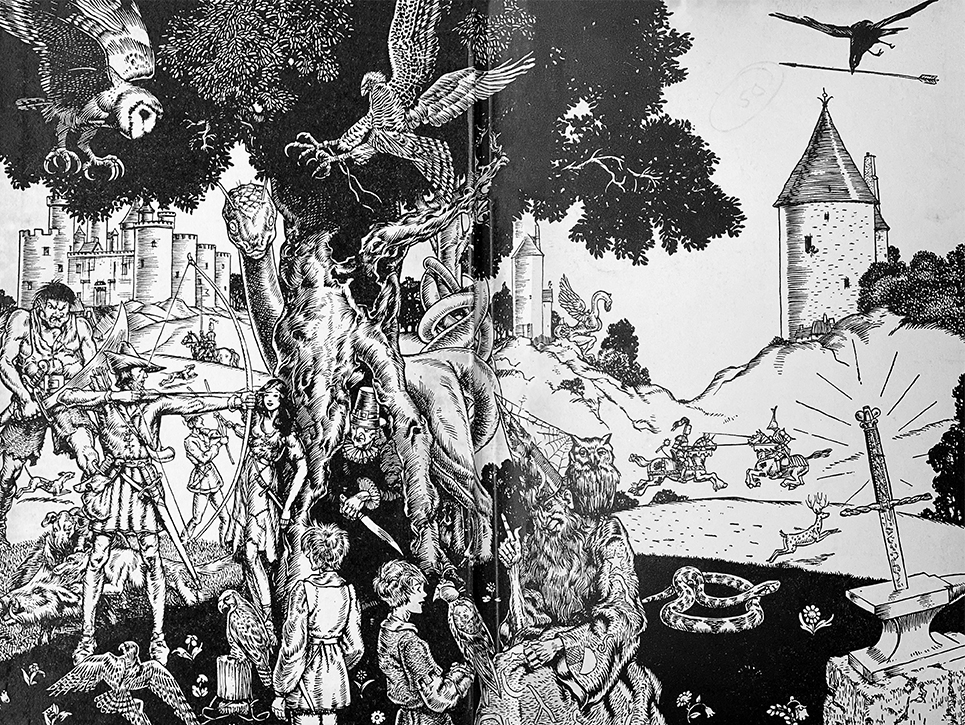 We asked kids in grades 4 through 12 to submit short fantasy stories of 1,000 words or less — and you delivered!

Thank you to everyone who submitted stories to our Magic, Mayhem and Monsters Writing Contest!

We congratulate James A., age 13, on his winning story. Here it is for all to enjoy.

My eyes flutter open as the sun comes up, the castle’s shadow looms over the sprawling streets of the city and its tall metal spires catch the sunlight. I hear the kingdom of Caledonia wake up with the traders setting up their stalls around the marketplace. I stumble out of bed, I catch a glance at my dark black hair starting to become unruly and a stubble developing, I ignore it and slowly assemble my city guard armor. At the thunderous clang of the chapel bells, I urgently rush down the stairs to the barrack’s war room. I see my brother-in-arms Cassian wandering around the commander’s desk. The commander is a grizzled, war-hardened veteran down one arm to the jaws of battle. His gruff voice bellows, “You’re late again, Ambrose! Next time this happens you’ll be handing in your sword!” As I launch into my rehearsed apology, I notice Cassian’s despondent blue eyes slowly surveying the room. I was readying an apology to Cassian too until he looked up and in a hushed tone informed me the king is still missing and two more of his sons killed mysteriously throughout the city. To make it worse, the only clue is a silver skull-like mask covering each of their unmoving faces.

Our commander now barks at both of us that our sole mission is to investigate one of the royal corpses in the southern side of the city. Once we exit the barracks, we are immediately engulfed by the everyday bustle of Caledonia. Cassian and I slowly clear a path through the crowds and every street we pass seems to get less crowded and more dark and gloomy, until we eventually reach the southern side of the city.

The southern side was draped in misery, the dilapidated stone buildings seemingly collapsing from the lingering despair. Cassian directs me through the labyrinthian alley, eventually leading us to a dead end with one unmoving man splayed in front of us.

The prince had huge claw marks coating his body and was painted in blood. Cassian inspects the wounds closely, and whispers “What kind of creature could have done this?” to himself. I walk towards the man and crouch over his head, his face covered with the same silver mask Cassian described earlier. My head cocks to the other side as I hear footsteps start to echo through the alleyway a hooded figure emerges, death mask jangling at his side. Cassian and I cautiously draw our swords. The hooded stranger steals a view of us and immediately sprints in the other direction, Cassian and I quickly pursue. The hooded suspect turns the corner and seems to vanish.

Cassian and I look defeated after we realize we lost our only lead, until I notice a grate on the side of the street ajar and point it out to Cassian. We jump down into the sewers and I am immediately taken aback by the terrible smell of the stagnant water, but still endure and venture through a complex network of sewers spanning under all of Caledonia. Cassian and I halt as we see silver dagger like claws approach from the shadows and scrape the stone making a deafening noise. The claws are quickly followed by three gigantic hound heads emerging from the darkness. The heads are conjoined to a mountainous body, I looked over to Cassian who was deathly pale and frozen in disbelief. The creature starts to charge forward directly at us, I hastily draw my sword and meet it head on. As I slash through the beast’s left head, it unleashes an otherworldly roar. Recoiling, I am almost immediately impaled by its spear-like teeth. I position my sword for another slash but the creature’s spiny tail swings around and sends my weapon clattering away. Cassian shields me while I hastily reach for my knives. Cassian is flung to the

other side of the sewer from one of the razor sharp claws. I attempt to run to his aid but am boxed out by the hound. I must get to Cassian! rings through my head. My desperation propels me into the air with both daggers behind my head until plunging into the center head. The Beast Thuds to

the ground and all of the light leaves all its eyes creating a dark void. I ignore the blood that covers me in a second skin and run to Cassian. My body rushes with relief when I feel he still has a pulse, it seems he broke some ribs and lost consciousness when hitting the murky stone. I prepare to get Cassian back to the barracks, but then notice that right behind the fallen beast is a large iron door.

The death hound must have been guarding it, as I get closer I am taken aback by the mysterious runes covering its surface. I push against the door and it immediately reveals a dungeon-like room. The walls hold only one silver skull mask left, ready to meet its victim. I see a small cage and inside I immediately recognize the king trapped inside, But why is he still alive while all of his bloodline has ended? The wall starts to ripple and the hooded figure appears from it. What sorcery is this? The person removes his hood and reveals a face identical to the king. Fire springs from the person’s hands and weaves through his fingers without burning him. Dark magic, He shoots two balls of fire at me and I raise my shield with only a split second to react. I am engulfed by a sea of inferno, and am only able to hurl two of my knives before the world turns black…

My eyes shoot open and I launch myself upright, Cassian is leaning over me. I take in my surroundings and see we are still in the dungeon-like lair, but on the stone floor the sorcerer’s lifeless body. I sink back onto the floor exhausted yet victorious.

This exhibition programming is supported by the Connecticut Humanities.