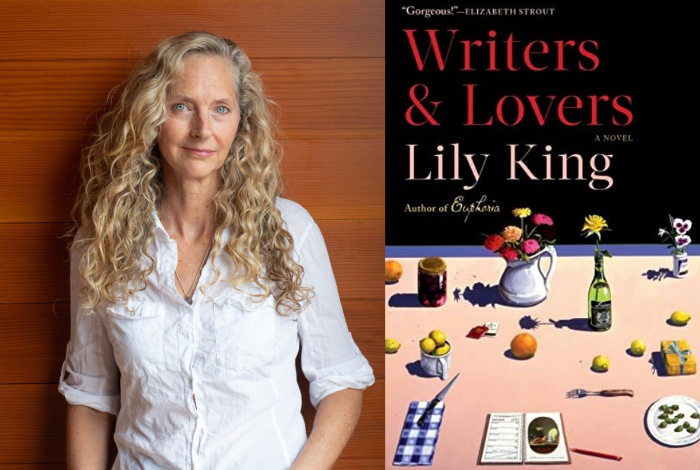 Join us for a Digital Meet the Author event on Zoom with Lily King, author of Writers & Lovers.

Written with King’s trademark humor, heart, and intelligence, Writers & Lovers is a transfixing novel that explores the terrifying and exhilarating leap between the end of one phase of life and the beginning of another.

“Writers & Lovers, while describing the intense effort of putting words in order, feels effortless, or at least like an unconscious natural process. King’s sentences are like layers of silt and pebbles condensed into sedimentary rock — distinct from one another but fitted into an indestructible whole.
— Los Angeles Times, By Hillary Kelly, March 1, 2020

About Lily King
Lily King is the award-winning author of five novels. Her most recent novel is Writers & Lovers, published on March 3rd, 2020.

Lily King grew up in Massachusetts and received her B.A. in English Literature from the University of North Carolina at Chapel Hill, and her M.A. in Creative Writing from Syracuse University. After grad school she took a job as a high school English teacher in Valencia, Spain and began writing her first novel. Eight years, ten more moves all over the US, and many bookstore, restaurant and teaching jobs later, that novel was published as The Pleasing Hour in 1999.

The Pleasing Hour won the Barnes and Noble Discover Award, a Whiting Writer’s Award, was a New York Times Notable Book and an alternate for the PEN/Hemingway Award. It was followed by The English Teacher (2005) and was a Publishers Weekly Top Ten Book of the Year, a Chicago Tribune Best Book of the Year, and the winner of the Maine Fiction Award. Her third novel, Father of the Rain (2010), was a New York Times Editors Choice, a Publishers Weekly Best Novel of the Year and winner of both the New England Book Award for Fiction and the Maine Fiction Award. Her fourth novel, Euphoria (2014), won the Kirkus Award, The New England Book Award and was a finalist for the National Book Critics Award. Euphoria was named one of the 10 Best Books of 2014 by The New York Times Book Review. It was included in TIME‘s Top 10 Fiction Books of 2014, as well as on Amazon, NPR, Entertainment Weekly, Publishers Weekly, and Salon’s Best Books of 2014. Reviewed on the cover of The New York Times Book Review, Emily Eakin called Euphoria, “a taut, witty, fiercely intelligent tale of competing egos and desires in a landscape of exotic menace.” It has been optioned by the BBC as a limited series.

Lily’s first short story was published in Glimmer Train in 1991. Other stories, essays, and reviews have since appeared in a variety of publications, including The New York Times, The Washington Post, Vogue, The Los Angeles Review of Books, One Story, The Harvard Review, Ploughshares, and several anthologies. Her novels have been published in 20 languages.

In 1995 she met a guy named Tyler at her friend Bernardine’s house in Belmont, Mass. They married in 1998. They have two daughters and two dogs and live in Portland, Maine.

About Writers & Lovers
Following the breakout success of her critically acclaimed and award-winning novel Euphoria, Lily King returns with an unforgettable portrait of an artist as a young woman.

Blindsided by her mother’s sudden death, and wrecked by a recent love affair, Casey Peabody has arrived in Massachusetts in the summer of 1997 without a plan. Her mail consists of wedding invitations and final notices from debt collectors. A former child golf prodigy, she now waits tables in Harvard Square and rents a tiny, moldy room at the side of a garage where she works on the novel she’s been writing for six years. At thirty-one, Casey is still clutching onto something nearly all her old friends have let go of: the determination to live a creative life. When she falls for two very different men at the same time, her world fractures even more. Casey’s fight to fulfill her creative ambitions and balance the conflicting demands of art and life is challenged in ways that push her to the brink.

Writers & Lovers follows Casey–a smart and achingly vulnerable protagonist–in the last days of a long youth, a time when every element of her life comes to a crisis.