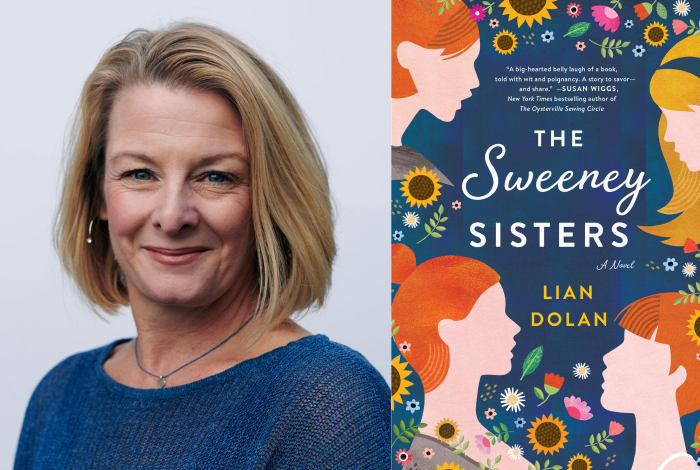 Enjoy a Meet the Author chat with author Lian Dolan and Finley Shaw of Finley’s Fiction while they chat about Dolan’s latest novel The Sweeney Sisters. Join us on Facebook Live for their engaging conversation, followed by a LIVE Q&A with Ms. Dolan. All you have to do is tune in at 6:00 p.m. on Facebook!

Set in Southport, The Sweeney Sisters is Dolan’s biggest, boldest, most entertaining novel yet—a hilarious, heartfelt story about books, love, sisterhood, and the surprises we discover in our DNA that combines the wit of Jonathan Tropper with the heart of Susan Wiggs.

This virtual program is FREE. Registration below is appreciated.

Lian is the producer and host of Satellite Sisters, the award-winning talk show she created with her four real sisters. On Satellite Sisters, she’s interviewed everyone from Nora Ephron to Madeleine Albright to Big Bird. Satellite Sisters began life as a syndicated radio show and is now a top-rated podcast for women. The recent book by the Satellite Sisters, You’re the Best: A Celebration of Friendship, is popular with book clubs.

A popular speaker who combines humor and heart, Lian has appeared on The Oprah Winfrey Show, CBS Sunday Morning and The Today Show and many local TV stations. She’s been a featured speaker at the LA Times Festival of Books, the Santa Barbara Celebrity Authors Lunch, the Literary Guild of Orange County Festival of Women Authors and dozens of other events at libraries, book stores, schools and women’s organizations across the country. In 2020, she’ll be on the faculty of the Erma Bombeck Writers Workshop.

About The Sweeney Sisters
Maggie, Eliza, and Tricia Sweeney grew up as a happy threesome in the idyllic seaside town of Southport, Connecticut. But their mother’s death from cancer fifteen years ago tarnished their golden-hued memories, and the sisters drifted apart. Their one touchstone is their father, Bill Sweeney, an internationally famous literary lion and college professor universally adored by critics, publishers, and book lovers. When Bill dies unexpectedly one cool June night, his shell-shocked daughters return to their childhood home. They aren’t quite sure what the future holds without their larger-than-life father, but they do know how to throw an Irish wake to honor a man of his stature.

But as guests pay their respects and reminisce, one stranger, emboldened by whiskey, has crashed the party. It turns out that she too is a Sweeney sister.

When Washington, DC based journalist Serena Tucker had her DNA tested on a whim a few weeks earlier, she learned she had a 50% genetic match with a childhood neighbor—Maggie Sweeney of Southport, Connecticut. It seems Serena’s chilly WASP mother, Birdie, had a history with Bill Sweeney—one that has remained totally secret until now.

Once the shock wears off, questions abound. What does this mean for William’s literary legacy? Where is the unfinished memoir he’s stashed away, and what will it reveal? And how will a fourth Sweeney sister—a blond among redheads—fit into their story?

By turns revealing, insightful, and uproarious, The Sweeney Sisters is equal parts cautionary tale and celebration—a festive and heartfelt look at what truly makes a family.

About Finley Shaw
Finley Shaw graduated from Colgate University in 1995, where she received her BA for History. After college, Finley worked in public relations in New York City for over ten years, representing corporate clients in the consumer products industry.

Finley is the owner and founder of Finley’s Fiction, a small, independent bookstore on Shelter Island Heights, NY. Since opening the bookstore two years ago, Finley has hosted numerous bestselling authors for book signing events at her Shelter Island bookstore.

Finley resides in Fairfield with her husband, Patrick, and their four children and two dogs.