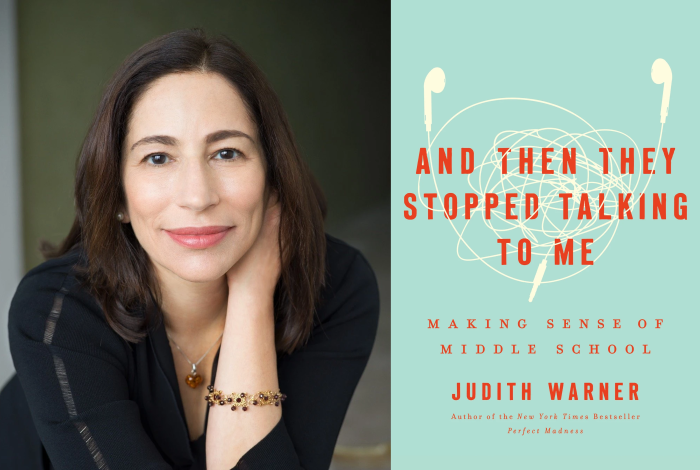 From the New York Times bestselling author of Perfect Madness: Motherhood in the Age of Anxiety comes a manifesto on why we urgently need to rethink the middle school years.

Join us for a Digital Meet the Author event on Facebook Live with Judith Warner, author of And Then They Stopped Talking to Me. Explore the unique impact of middle school on children through an interview with Ms. Warner by Greens Farms Academy educator Ben Gott, followed by Q&A with the author on Facebook Live.

“ Middle school is a monstrous roller coaster ride. . . . Judith Warner has written the book that every parent of every adolescent needs and has not been able to find. It not only helps us decipher what’s going on inside our middle schoolers’ hearts and minds, but also gives us concrete advice on what to do about it.”
— Lisa Belkin, creator of the Motherlode blog, for the New York Times

Part cultural critique and part call to action, this essential book unpacks one of life’s most formative periods and shows how we can help our children not only survive it, but thrive.

Registration below is appreciated.

About “And Then They Stopped Talking to Me”
The very phrase “middle school” evokes feelings of abject misery: painful loneliness, extreme self-consciousness, a sense of never measuring up or fitting in. Due to a perfect storm of developmental changes—physical, psychological, and social—these years are frequently ones of great distress for parents and children alike. Judith Warner believes they don’t have to be quite so bad — if we adults are willing to take a hard look at ourselves and the culture that we’ve created. Marshaling history, sociology, and science—and with a singular mix of curiosity, wit and skepticism—she shows that we need an enlightened new approach to make the most of this crucial period in children’s lives. And the ideal place to start, she writes, is by becoming better aware of the enduring power of our own inner middle schoolers.

About Judith Warner
Judith Warner, author of the new book, And Then They Stopped Talking to Me: Making Sense of Middle School, is best known for her 2005 New York Times best-seller, Perfect Madness: Motherhood in the Age of Anxiety, and New York Times column, “Domestic Disturbances.” She is currently a Journalism Fellow for the Women Donors Network’s Reflective Democracy Campaign and a Senior Fellow at the Center for American Progress.

Her last book, We’ve Got Issues: Children and Parents in the Age of Medication, received a 2010 Outstanding Media Award for Science and Health Reporting from the National Alliance on Mental Illness, a 2011 Changing Lives Award from the Parent/Professional Advocacy League, and a 2012 Friends of Children’s Mental Health Media Award from the American Academy of Child and Adolescent Psychiatry. She was also awarded a 2012-2013 Rosalynn Carter Fellowship for Mental Health Journalism.

A former special correspondent for Newsweek in Paris, she hosted “The Judith Warner Show” on XM satellite radio from 2005 to 2007, and wrote the 1993 best-seller Hillary Clinton: The Inside Story, as well as several other books.

About Ben Gott
While a student at Bowdoin College, Ben Gott completed his student teaching practicum at Richmond Middle School in Richmond, Maine, receiving his State of Maine teaching certification in May of 2001. Upon graduation, he worked at The Rectory School in Pomfret, Conn. from 2001 to 2007. In 2007, Gott moved to Fairfield County and began teaching sixth-grade English at Greens Farms Academy, where he has been ever since. In addition to teaching, he currently serves as a sixth-grade advisor, an occasional coach, and GFA’s Middle School Coordinator for Equity & Inclusion.

In the summer of 2000, Gott was hired as a summer intern at Choate Rosemary Hall. In 2002, he became the Director of Choate’s Young Writers’ Workshop and served as the Director of Summer Writing Programs from 2007 to 2013. He now spends his summers off reading and writing. In addition to his A.B. in English and Africana Studies from Bowdoin, he also holds an M.A. in American Studies from Fairfield University.