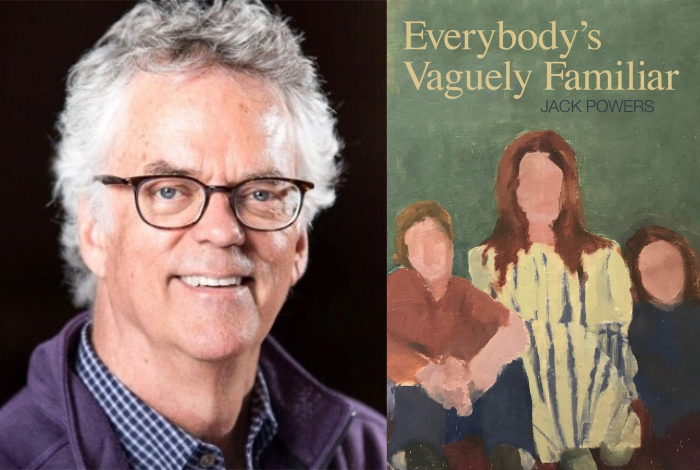 Join us for a Digital Meet the Author event on Zoom with Jack Powers, interviewed by Del Shortliffe. Powers is the author of Everybody’s Vaguely Familiar. Powers’ poems, taken together, describe a full arc of living.

This digital program is FREE thanks to the generosity of donors like YOU. Make a donation today and you will be providing the vital funds to support Pequot Library’s free programs and resources: story times, author talks, exhibitions, books for patrons, scholarly research, volunteer opportunities, student experiences, Pequot Library’s invaluable Special Collections of rare books, and so much more!

About Jack Powers (author)
Jack Powers is the author of Everybody’s Vaguely Familiar published by Golden Antelope Press. His poems and essays have appeared in The Southern Review, The Cortland Review, The New York Times and elsewhere. He won the 2015 and 2012 Connecticut River Review Poetry Contests and was a finalist for the 2013 and 2014 Rattle Poetry Prizes. He and his wife, Anne, live in Fairfield and they have three children scattered down the east coast. He recently retired from Joel Barlow High School after 38 years of teaching special education, English and math.

About Everybody’s Vaguely Familiar
“Everyone’s Vaguely Familiar is a book that will last” according to D. Nurkse. It “is brilliant, humanistic, quick-witted and fast-paced—but the cameos of family, high school, pop icons and suburbia open seamlessly onto the sacred ground of tragedy: mortality, suffering, how we create ourselves out of nothing and are undone.”

Amy Holman adds, “Jack Powers is attuned to twists of life and language—insults refitted as endearments, families defined by their troubles, great care taken with modes of recklessness, and in his deftly funny title poem, remembering people while forgetting faces.”

And Kevin Pilkington argues Everybody’s Vaguely Familiar is “as human as it gets, maneuvering through the emotional landscape of life with wit, a no-nonsense clarity and a touch of sarcasm…and celebrate what it means to be alive.”

About Del Shortliffe
Del Shortliffe retired in 2016, after 41 years of teaching middle and high school English, which included 7 years leading the English Department at the Bedford Central School District in New York. Del’s been writing stories, poems, and personal essays since he was the young child of an English teacher, but joy in writing deepened in 1986 when he first studied with The Connecticut Writing. He also met Jack Powers through the Writing Project in 1986, and he’s been a friend of Jack’s and a true fan of Jack’s work ever since. For 36 years he has lived with his wife, Jean, in Norwalk, where they raised their three children. Del’s proud to say that all three write very well.