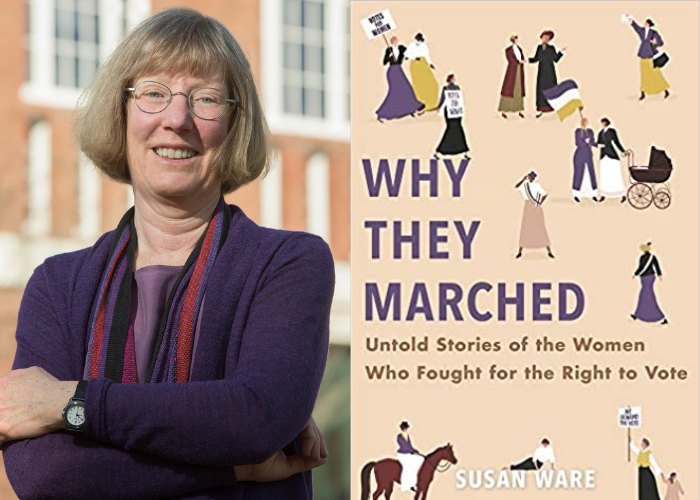 As part of Pequot Library’s [Her]story exhibition, biographer and women’s historian Susan Ware discusses her book Why They Marched: Untold Stories of the Women Who Fought for the Right to Vote.

A pioneer in the field of women’s history and a leading feminist biographer, Susan Ware is the author and editor of numerous books on twentieth-century U.S. history. Educated at Wellesley College and Harvard University, she has taught at New York University and Harvard, where she served as editor of the biographical dictionary Notable American Women: Completing the Twentieth Century (2004). Since 2012, she has served as the general editor of the American National Biography, published by Oxford University Press under the auspices of the American Council of Learned Societies. Ware has long been associated with the Schlesinger Library at the Radcliffe Institute for Advanced Study where she serves as the Honorary Women’s Suffrage Centennial Historian. Her most recent publications include Why They Marched: The Untold Stories of the Women Who Fought for the Right to Vote (2019) and American Women’s Suffrage (2020), an anthology published by The Library of America.

Registration is appreciated but not required. A Zoom link will be posted on the day of the event.