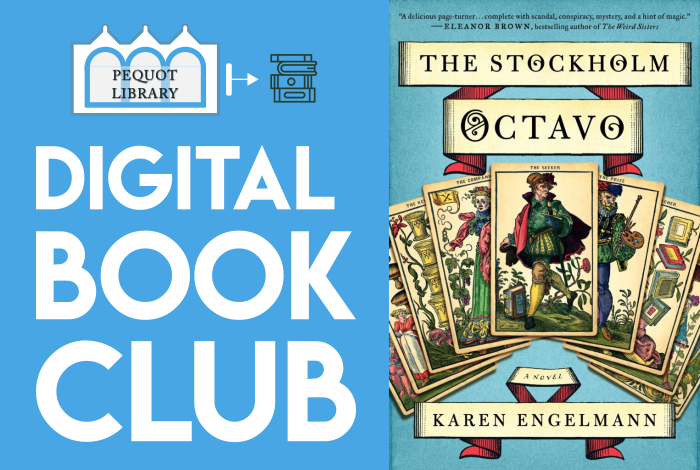 The Digital Book Club selection for July is The Stockholm Octavo by Karen Engelmann: Historical fiction set in the far north during the turbulence of the late 18th century, The Stockholm Octavo portrays a world of intrigue, betrayal and love infused with cartomancy, folding fans, and the inevitability of fate.

Join our Facebook Group: a place for community reading, discussion, and connection around the Library’s Digital Book Club selections. Share your thoughts, enjoy interviews with the author, and more!

Register below to join the Digital Book Club discussion on Zoom on July 29 at 2:00 p.m., led by Pequot Library’s Chief Librarian Christine Catallo. Registered participants will receive an email on the day of the event with link/details on how to join the meeting. Limited to 100 participants.

About The Stockholm Octavo
Revolution and unrest are boiling up on the continent of Europe, but Sweden seems immune. All is well in the capitol city of Stockholm or so it seems to Emil Larsson, a self-satisfied bureaucrat in the Office of Customs and Excise and a true man of the Town – drinker, card shark, and contented bachelor. That is until Mrs. Sofia Sparrow, fortune-teller and proprietor of an exclusive gaming parlor, shares a vision of a golden path that will lead Emil to love and connection.

Mrs. Sparrow lays an Octavo for him, a spread of eight cards that augur the eight individuals who can help him realize this vision–if he can find them. But as Emil eagerly searches for his eight, he comes to the startling realization that finding them is no longer just a game of the heart, but crucial to foiling the assassination of King Gustav III and pulling his country back from the crumbling precipice of rebellion and chaos.

From Karen Engelmann
I was born and raised in Iowa, and had an early love of drawing, reading and writing, but art was more fun. This is how life decisions are made. I received a BFA from the University of Iowa, then pursued a career in illustration, graphic design, and art direction in Sweden — after pursuing a boyfriend there first — working freelance, for the daily newspaper Sydsvenska Dagbladet, and IKEA. After nearly a decade, I made another fairly ridiculous transatlantic move to New York City, eventually working for Macy’s, Sotheby’s, Seth Godin Productions and numerous free-lance clients.

Eventually, I reengaged with writing and began raising children (not the best combo.) I authored/co-authored/designed three books between 1997 and 2000, and received an MFA in Creative Writing from Goddard College in 2009. My thesis project, The Stockholm Octavo (historical fiction set in late 18th century Sweden) was published by Ecco Press in 2012 and translated to 14 languages. The novel was an Indie Next selection, New York Times Book Review Editor’s Choice, and received starred reviews in Kirkus, Publisher’s Weekly, Booklist and Library Journal. It was listed in Kirkus Reviews Best Fiction for 2012, a grant recipient from the American Scandinavian Society, and a 2013 winner of the Washington Irving Book Award for Fiction.

I’ve written pieces for The Wall Street Journal, Powell’s, Broad Street and other online sites. I was fortunate to be a 2014 Walter Dakin Fellow at the Sewanee Writers Conference and chosen as one of ArtsWestchester’s 50 for 50 in 2015. I’m currently revising a novel, Miss Hall’s Last Costume, and promoting non-partisan good cheer with HBD2U — my illustration project sending daily Happy Birthday greetings to the world via Facebook and Instagram. I live in NYC and Phoenix.