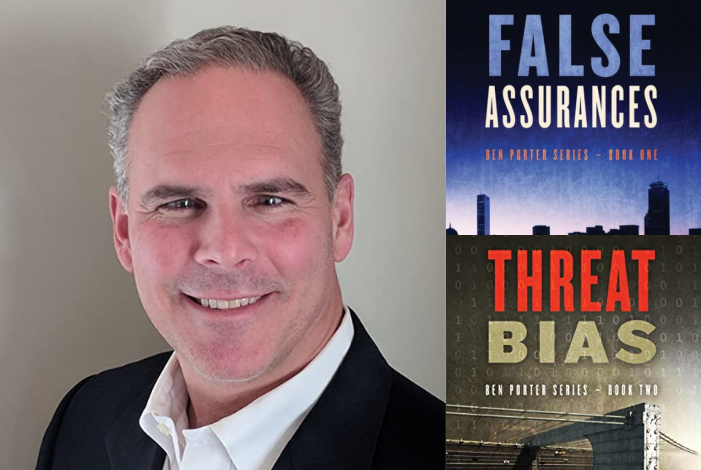 “Fast, masterfully-plotted, and rich with vibrant details—everything you want in a thriller . . . and I’ll take all the Ben Porter I can get!”
– Ryan Steck, The Real Book Spy

Join us for a Digital Meet the Author chat on Zoom with Christopher Rosow, as interviewed by Sissy Biggers. Rosow is the author of False Assurances and Threat Bias, the first two books in his brand-new thriller series about FBI staffer Ben Porter. Enjoy a riveting interview and get hooked on a new thriller series!

Registration is required below. You will receive an email with Zoom meeting information on the day of the event.

An avid, lifelong sailor, he has competed and sailed in many places around the world, including the United States East and West coasts, the Great Lakes, and the Gulf of Mexico, internationally in Japan, Bermuda, the Caribbean, and Canada, and has made a transit of the Panama Canal.

Rosow lives in Connecticut with his family, dogs, and way too many boats.

Sissy Biggers’ career has touched every broadcast platform since her behind-the-scenes-role at the NBC Network. She has been a live TV host on the Lifetime Network and Food Network, along with ABC’s Extreme Makeover and PBS’s Victory Garden.  She has inspired countless viewers, individuals, and businesses as a lifestyle expert, media coach, and brand consultant.

About False Assurances
On the morning of July 12, 2017, the FBI Boston field office receives what appears to be a hoax call:  a man rescued from the waters off Massachusetts has claimed that his sailboat was hijacked and used to smuggle weapons and terrorists into the United States.  With local agents tasked to prepare for an evening Presidential visit to downtown Boston, and with procedures requiring a response to any threat, no matter how unreliable it may seem, FBI administrative staffer Ben Porter is dispatched to investigate the call.

What follows is a tale of a high-seas hijacking that leads to a completely plausible, and therefore terrifying, story of how terrorists can use simple disguises and deceptions to stage an attack on America. All that stands between them and success is Ben Porter.

Can Ben, untrained in field work and relying only his wits and intuition, uncover the deadly plot … in time to stop it?

About Threat Bias
Credited with successfully stopping a terror threat in 2017, FBI staffer Ben Porter has been promoted to Special Agent. But, within days of receiving his credentials and weapon, the tables are turned, and Ben finds himself—and his family—as a target. Ben must overcome his inexperienced biases to understand the motivation of his foes, in order to not only secure his own safety, but also to intercept a nefarious, invisible, and unprecedented new weapon of terror.

Not only does the plot of this tale twist and turn at speed, the story also questions the blind faith in computer security against the emerging technology that makes self-driving cars possible.