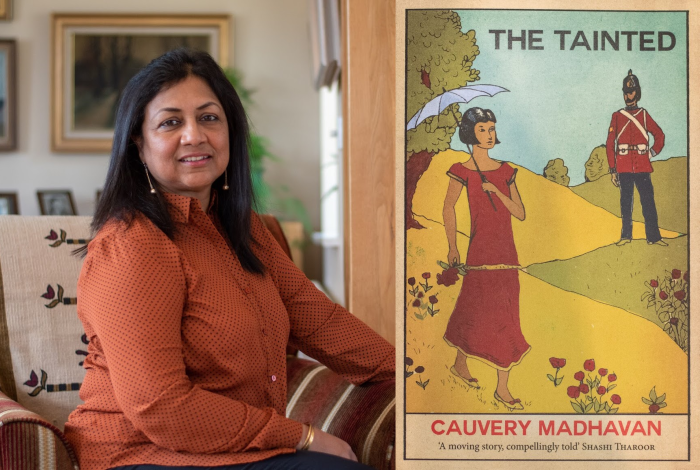 Enjoy a live Meet the Author event with Cauvery Madhavan, author of The Tainted. Madhavan will be interviewed on Zoom by her friend and fellow author, Dr. Rochelle Almeida.

“Cauvery Madhavan’s evocative narrative spins together the intriguing lives of her characters over nearly seven decades and makes ‘The Tainted’ a riveting read. Unfolding largely through conversations among the principal characters is an elegiac tale of the Anglo-Indian community, their heritage and their uncertain future. The intricate details of every experience are captured in simple language and with great precision. A moving story, compellingly told.”
— Shashi Tharoor, Indian politician and writer

Registration is required below. This event will take place on Zoom and is limited to 100 Zoom participants. Registered participants will receive an email with Zoom meeting information on the day of the event.

About Cauvery Madhavan (author)
Cauvery Madhavan was born in India and moved to Ireland thirty three years ago, arriving on Valentines Day and, despite the Irish weather, has been in love with the country ever since. Cauvery is the author of three books of fiction – Paddy Indian, The Uncoupling and The Tainted. She writes opinion pieces for the Irish Times and wrote a Saturday column for the Evening Herald for seven years. She has also contributed to the Sunday Tribune, The Phoenix and Travel Extra. She is currently working on her  fourth novel. She lives with her husband and three children in County Kildare.

About The Tainted
It’s spring 1920 and unseasonably hot in the small military town of Nandagiri in south India. Colonel Aylmer, commander of the Kildare Rangers, a famed Irish Regiment, rules the roost here. A decent distance away, hidden from view, lies the native part of Nandagiri – Black Town, with its heaving bazaar, reeking streets and brothels.

Everyone in Nandagiri, especially the Irish Catholic soldiers and their Anglo-Irish officers, knows their place and the part they were born to play. But there is one exception. The Anglo-Indians, tainted by their mixed blood, belong . . . nowhere.

As tigers prowl the surrounding hills, the heat builds – and when news of the Black and Tans’ atrocities, at home in Ireland, reaches the troops, even their priest, Father Jerome, cannot cool the men’s hot-headed rage. Politics vie with passion as Private Michael Flaherty pays court to Rose, Mrs Aylmer’s Anglo-Indian maid . . . but mutiny brings heroism and heartbreak in equal measure. Only the arrival of Colonel Aylmer’s grandson Richard, some 60 years later, will set off the reckoning, as the aftermath of the mutiny brings conflicts of identity and belonging simmering to the surface again. Will those who were parted be reunited, and those who were lost be found again?

About Rochelle Almeida (interviewer)
Dr. Rochelle Almeida is Professor of the Humanities and Global Cultures (South Asian Civilization) in Liberal Studies at New York University. She has taught Writing in the US, the UK, India and, most recently in Uzbekistan on a Fulbright-Nehru Senior Research Fellowship. A prolific international freelance journalist, blogger, research scholar and creative writer, she is the author of three monographs, two co-edited anthologies, one individually edited anthology, and a fictional Memoir (The Year The World Was Mine: An Anglophile Hits A Half Century). She is an Emeritus Docent at the Metropolitan Museum of Art and co-winner with her husband Llewellyn of the Stanley-Crane Volunteer of the Year Award from Pequot Library with which she is associated as a member of the Meet The Author Committee.