Save the Children hosts Women in Philanthropy at Pequot 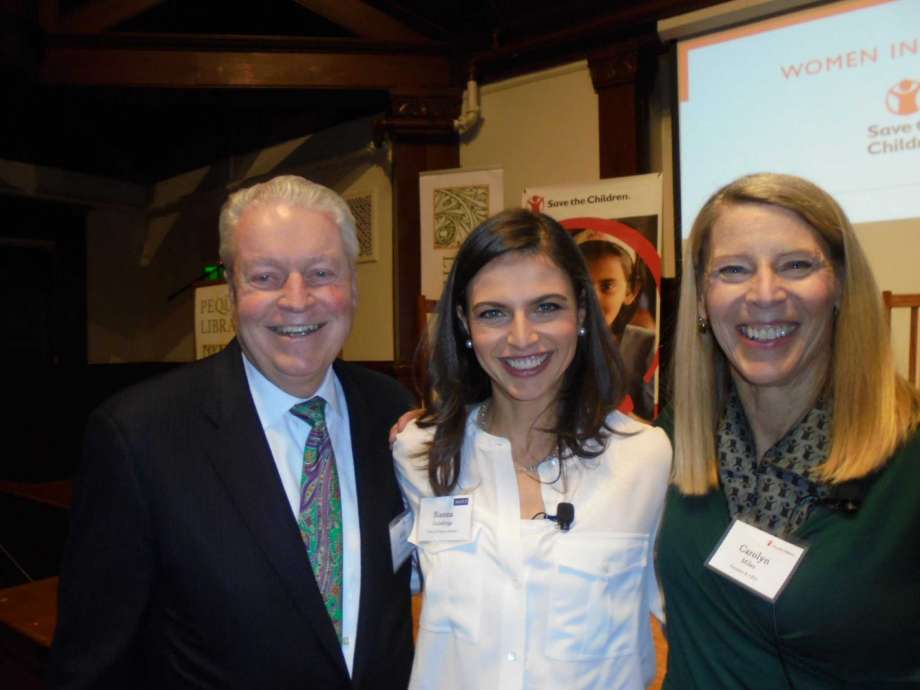 “It is building community, being an advocate, organizing for effective change and investing in the future,” according to Fiona Hodgson, vice president for Development and Philanthropic Services for the Fairfield County Community Foundation. Hodgson was one of four local philanthropic leaders who served as panelists Thursday at the Pequot Library to discuss how women are changing the face of philanthropy and social entrepreneurship.

Bianna Golodryga, news and finance anchor at Yahoo!, served as moderator for the “Women in Philanthropy” program, presented by Save the Children and the library. “We are the most philanthropic country in the world,” she said.

“Through philanthropy we make the world a better place,” said Susan Friedlander Calzone, CEO of Foundation Source in Fairfield, who was joined on the panel by Carolyn Miles, president and CEO of Fairfield-based Save the Children and Emily Tow Jackson, president and executive director of the Tow Foundation in New Canaan.

Although incoming president Donald Trump was not a focus of the discussion some people tacitly and some directly expressed concern about his personal philosophies and proposed policies on illegal immigrants, Syrian refugees, Muslims entering the country, the current healthcare system, education, and how his presidency could impact non-profit organizations and social causes.

“I am a refugee myself from the former Soviet Union so I know what it’s like to grow up when you’re considered the enemy in a country that is now your own and you’ve come to love,” Golodryga said.

“This is a very important topic at a very important time,” said Fairfield First Selectman Mike Tetreau, referring to the current “political turmoil and economic turmoil.” Tetreau was one of a handful of men in the audience of more than 200 people. He said local residents are very generous to charitable causes, which was especially in evidence after Hurricane Sandy and the tragedy in Sandy Hook.

Miles said it’s important to do something, “maybe now more than ever.” Although she wonders if there will be some push-back from the incoming administration, Miles said “If there was ever a bi-partisan issue it’s children and their future.”

There was some discussion of gender roles in philanthropy. Calzone said one man told her that women think with their head and their heart and they are good listeners. Hodgson said many women are mothers and as such they are multi-taskers. According to Miles, “Women are better at thinking about the whole picture,” but added that all points of view are necessary in the philanthropic equation. “We’re stronger when we bring many people together to achieve a goal,” Jackson said.

The panelists concluded with recommendations for getting involved to make change locally and globally. Through her organization Hodgson suggested women can mentor and tutor, teach financial literacy, support Giving Day – a 24-hour online fund-raiser and attend a legislative forum to better understand local issues.

Hodgson said there is a large disparity in Fairfield County most glaringly in academic achievement and income levels. “Lack of opportunities and education just kills hope and that’s just wrong,” she said. “The way to make real change is through philanthropy,” she said.